The "Cup of Trembling"

A few days before the recent 'pilgrimage' of Pope Benedict XVI to the Middle East, Israel Today  reported that the Pope would demand control of the Holy Places:

"Long-standing Vatican claims to at least five Christian holy sites in Israel are expected to be near the top of the agenda when Pope Benedict XVI visits the Holy Land next week.

"Israel has long rejected the claims, but President Shimon Peres is strongly urging the government of Prime Minister Benjamin Netanyahu to turn the sites over to the Catholic Church in hopes of boosting Jewish-Christian relations."

To those of us who have been watching the Vatican manoeuvre itself into a position to claim sovereignty over Jerusalem, this prediction by Israel Today will come as no surprise.

But, as reported yesterday in Haaretz,  Netanyahu is obviously no fool and will not be intimidated by so-called "world opinion" voiced by the increasingly shrill posturings of those with anti-Israel agendas:

"Jerusalem is the eternal capital of the Jewish people, a city reunified so as never again to be divided," Netanyahu said at a ceremony to mark Jerusalem Day in the city's Mercaz Harav yeshiva. "Our people's unparalleled affinity to Jerusalem has spanned thousands of years, and is at the basis of our national renaissance. It has united our people, secular and religious people alike."

"Jerusalem Day celebrates the conquest of the city during the 1967 Six Day War, before which Jordan controlled east Jerusalem, while Israel had the western section. Shortly after the war, Israel annexed east Jerusalem.

"Earlier on Thursday, Netanyahu said similar things at a state ceremony to mark the day.

"United Jerusalem is Israel's capital. Jerusalem was always ours and will always be ours. It will never again be partitioned and divided," Netanyahu said.

"Netanyahu said he had made the same declaration during his recent visit to Washington, where he met with United States President Barack Obama over the peace process and Iran's nuclear program.

"Only under Israeli sovereignty will united Jerusalem ensure the freedom of religion and freedom of access for the three religions to the holy places," Netanyahu added. 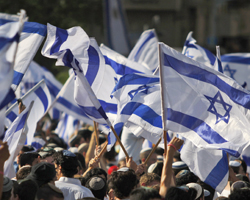 Netanyahu's total rejection of all spurious claims on Israel's capital will infuriate many. Palestinian negotiator, Saab Erekat, has already responded:

"Mr. Netanyahu, by saying that, he's saying the state of conflict will be eternal."

The Obama administration will not be happy and, make no mistake, the Vatican hierarchy will be positively fuming.

But, as Saab Erekat recognises, it is an eternal battle. Who is to have control over the truly eternal city of Jerusalem? Is it to be Israel? Or is it to be Rome?

There is a very revealing passage in Zechariah about the ultimate fate of Jerusalem, the city where YHWH has put his name:

"Behold, I will make Jerusalem a cup of trembling unto all the peoples round about....And it shall come to pass in that day, that I will seek to destroy all the nations that come against Jerusalem." [Zechariah 12:2-9]

See especially the permanent post The Holy See and the Holy Places and also the categories Rome and Jerusalem, Rome and the State of Israel, Rome and the Jews.