Making sense of the nonsense 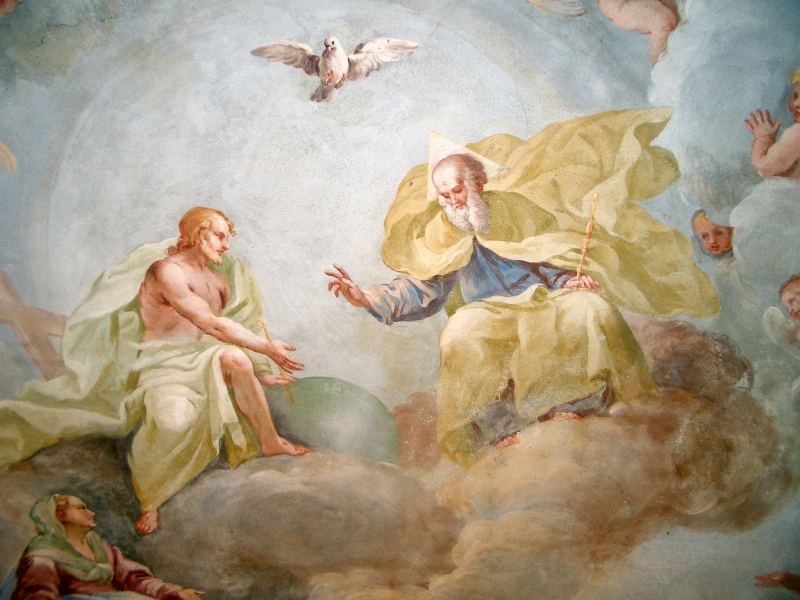 Fresco of the Holy Trinity by by Luca Rosetti, Chuch of San Gaudenzio, Torino, Italy. Public Domain via Wikidmedia Commons

As pointed out in Conception Deception : Part Four, the author of Matthew had a compelling reason for penning his account of the birth of Jesus, a reason which had nothing at all to do with the nonsensical doctrine of a Virgin Conception/Birth. Now it’s time to move on to texts from Matthew Chapter One which are commonly adduced to defend this doctrine.

…she was found to be with child from the Holy Spirit (Matthew 1:18 ESV).

A consistent theme of the Hebrew Scriptures is that the Holy Spirit of God (the ruach ha-kodesh) is the one to whom credit must be given for everyhuman birth:

The Spirit of God hath made me, and the breath of the Almighty hath given me life (Job 33:4 KJV).

So Boaz took Ruth, and she became his wife. And he went in to her, and the LORD gave her conception, and she bore a son (Ruth 4:13 ESV).

And the LORD visited Hannah, so that she conceived, and bare three sons and two daughters… (1 Samuel 2:21 KJV).

To use this theme in a particular or exclusive way only where it refers to Jesus is to wrest the words of Gospel authors for purposes they could never have imagined.

…that which is conceived in her is from the Holy Spirit (Matthew 1:20 ESV).

It is obvious in 1:20 that the “Holy Spirit” does not refer to the manner of conception but to “that which is conceived in her”.

She will give birth to a son, and you are to give him the name Jesus (Yeshua), because he will save his people from their sins.” (Matthew 1:21 NIV)

It should be immediately apparent that the logical and causal relationship indicated by “because” is missing. This causal relationship is also missing in the Greek. (I have argued elsewhere that there is compelling evidence for the existence of a Hebrew subtext underlying our present Greek Gospels.)

The Hebrew name Yeshua is a shortened form of Yehoshua (Joshua). It is derived from YH, a shortened form of the Tetragrammaton YHWH, and the Hebrew verb root yasha meaning to save or to deliver. Only on the basis of a Hebrew original is this logical and causal relationship between the name and the function explicit, i.e., “you will call his name Yeshua (YH is our salvation) because he will save (deliver)…”

Although these two verses are quoted ad infinitum by advocates of the Virgin Conception/Birth, the context in which they were written is either completely ignored or is simply unrecognised. The one and only significance of Verse 1:23 is that it forms part of Matthew’s overall presentation of Jesus as the deliverer of Israel. (See Conception Deception : Part Two for an analysis of Isaiah 7:14 which is perhaps the most notorious of all “proof-texts”.)

All this took place to fulfil what the Lord had said through the prophet (Isaiah 7:14): “The virgin (parthenos) will conceive and give birth to a son, and they will call him Immanuel” (which means “God with us”). (Matthew 1:22–23 NIV)

Deliverance
Drawing on the meaning of Jesus’ name, to “save” or “deliver”, Matthew paints Jesus as recapitulating in his individual existence a selection of deliverance-themed passages in the Hebrew Scriptures, especially those associated with Moses. For Matthew, Jesus is the representative Israelite, the “corporate personality,” the one standing for the many, the one who fulfils in his individual existence God’s deliverance plan for the whole people of Israel. Jesus is Israel: Israel is Jesus. (See notes on Corporate Personality below.)

Discover Matthew’s method by checking the Gospel passage and then the source of his quote in its original context:

Corporate Personality
The Israelite religion, both past and present, is communal. In the words of the Jewish scholar Nicholas de Lange:

To be a Jew means first and foremost to belong to a group, the Jewish people, and the religious beliefs are secondary, in a sense, to this corporate allegiance.¹

Most prayers were, and still are, communal, as we see in the Lord’s Prayer. An old Hasidic saying goes like this:

A prayer which is not spoken in the name of all Israel is no prayer at all.²

Central to the idea of Israelite community is the concept of “corporate personality”. From ancient times, the entire community of past, present and future Israelites was seen as one personality, as:

A living whole, a single animated mass of blood, flesh and bones.³

Even today, at Passover, modern Jews are required to think of themselves as personally taking part in the Exodus and receiving the Torah at Sinai. Matthew draws on this Israelite concept of the “corporate personality” in his presentation of Jesus.

The name Immanuel has no special or extraordinary significance (see Judges 6:12–13). It is no different to many other Hebrew names possessed of similar meanings: Boel(in him is God); Abijah (my father is YHWH); Zebadiah (gift of YHWH); Ahijah(brother of YHWH); Elihu (my God is He).