The 'Pilgrim of Peace'

Evoking the shade of George Orwell, the Pope's 'Peace Pilgrimage' to the Middle East proved to be the very opposite. Pope Benedict XVI larded all his speeches with the cloying sentiments so beloved of his journalistic fan club - sentiments of "love," "peace," "justice," expressions of sorrow for the Holocaust etc. Despite pious appearances, however, every one of his statements was formulated to serve a distinctly un-peacelike agenda - the deliberate provocation of the State of Israel and the deliberate fanning of Palestinian religious and political hatred of the same State of Israel. 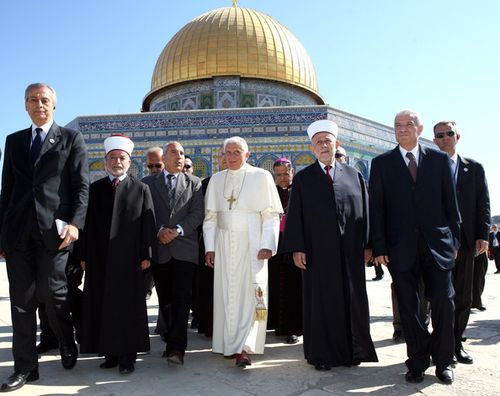 In The Holy See and the Holy Places, I remarked that the Vatican’s calculated violations of the 1993 Fundamental Agreement between Israel and the Holy See provided an excellent illustration of Roman tactics. Article 11, section 2, reads:

Since the signing of the Agreement, the Vatican or its agents have poured forth a steady stream of inflammatory statements masked by token gestures to Israel, pious platitudes, and faux sincerity.

By decrying the existence of the "separation wall" and by calling for a sovereign Palestinian state and an end to the Israeli embargo of Hamas-led Gaza, this 'Pilgrim of Peace' is now foresworn: he has yet again violated the terms of the Agreement by making comments on "disputed territories and unsettled borders." 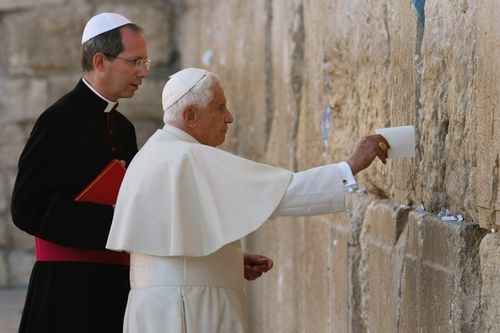 Just before leaving for Rome, the Pope seemed to make a concession to Israel by calling for recognition of Israel's right to exist.

"The way toward peace, asserted the Pope, is for it to be "universally recognized that the State of Israel has the right to exist, and to enjoy peace and security within internationally agreed borders" and "likewise acknowledged that the Palestinian people have a right to a sovereign independent homeland, to live with dignity and to travel freely."

And, no prize for guessing who will make the most noise about just where these borders should be. I'll make a prediction that the suggested borders will replicate those of 1948 - borders which rendered Israel totally and permanently vulnerable to a host of enemies. Well, that's the plan anyway, but I'll venture another prediction that there may be some unexpected opposition from a source much held in contempt by modern society, including those red-robed princes of the church.

We have seen in many previous posts that the Holy See has been engaged ever since the Crusades in a relentless war to establish its own hegemony over Jerusalem and Israel's "Holy Places." It is wise to remember that every papal word referring to the Middle East is designed to further this agenda. [See our categories Rome and the State of Israel and Rome and the Jews]. 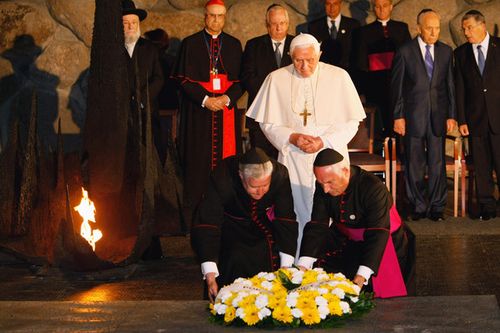 The overall Holy See strategy in the war over Jerusalem is to render the Israelis helpless in the face of an avalanche of sanctimonious mouthings while at the same time striking fear into their hearts by incorporating into papal speeches an undercurrent detectable only to those who keep watch on the relationship between Israel and the Holy See. This river of hate lurks just beneath the surface but is allowed to bubble up out of the darkness when necessary. Papal posturing notwithstanding, perpetual enmity exists between the Holy See and the State of Israel. We will one day investigate why these two entities cannot co-exist - it must be one or the other.

Middle: Pope places his note to God in the Western Wall [Jews are allowed to stand at the western wall supporting the Temple Mount] (Photo by David Silverman/Getty Images)

Bottom: The Pope apparently can't bend down to this lay wreath at the Yad Vashem Holocaust* Memorial's Hall of Remembrance. (Photo by David Silverman/Getty Images)