Home Archives
Jesus the Jew
The Doctrine of the Virgin Birth : Part 1

The Spirit of Truth

Very soon after the apostolic age, Christianity began to embrace anti-Jewish ideas and doctrines. Until relatively modern times, the Jewish nature of the New Testament documents went unrecognised because of Christian ignorance of Jewish thought.

It should come as no surprise, therefore, that Christians have always had little or no awareness of the Jewish roots of their faith, as the photo below demonstrates. This photo, courtesy of Yad Vashem, depicts the crucified Jesus looking in the direction of a sign which reads "Jews not welcome here." The photo was taken somewhere in Germany in the 1930's, still within the living memory of a few, which makes it all the more disturbing. 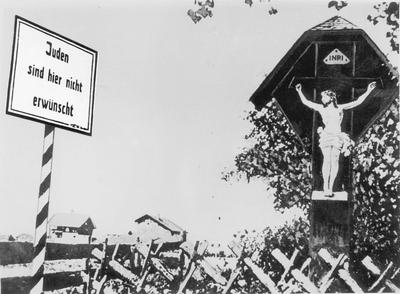 However, a new and searching light began to penetrate into the dark recesses of this millennial ignorance soon after the Second World War.

If the Holy Spirit of Truth, a thoroughly Jewish concept, is indeed present in this modern world, then it was instrumental in bringing about the two greatest sources of knowledge contributing to our understanding of Jesus and of the New Testament, since the New Testament was first written -  the discovery of the Dead Sea Scrolls and the adoption of Modern Hebrew as the official language of the State of Israel.

Astoundingly, these two sources of knowledge became available at the same time - 1947 and 1948. Since the establishment of the State, New Testament scholars based at the Hebrew University in Jerusalem have acquired a conversational knowlege of Hebrew. This conversational knowledge of Hebrew makes it easier to see the Hebrew subtext behind the Greek copies of the gospels while study of the Dead Sea Scrolls and coinage of the period is making it increasingly clear that Hebrew was spoken and written among Jesus' contemporaries.

Nowhere in the ancient world was the written word more revered than amongst the Hebrews. For a classic example of this reverence, we need look no further than the Book of Jeremiah where we learn that as soon as the prophet received the word of God, his scribe Baruch committed it to writing.

The Jewish religion centered on the written Hebrew Scriptures, which Jews were, and still are, admonished to know and teach their children.

We know from the Gospels that many who had gathered around Jesus were priests, professional scribes, theologians, and religious scholars.

We know that Jesus himself could certainly read, quote, interpret and debate the Hebrew Scriptures with these priests, professional scribes, theologians and scholars.

We know that the disciples interpreted and defended their views of written Scripture.

We know that the titulus was placed in a position where it could be read by "many" Jews.

Yet, in the educated environment of Jerusalem, with its abundance of written literature, its reverence for the written word, and the presence of the aforementioned priests, scribes, theologians, and religious scholars, their modern counterparts would have us believe that no one committed to writing the words of him who some believed to be no less that the awaited Davidic Messiah.

Well, we need believe the assertions of these modern theologians no longer because hidden from view all this time, as if waiting to be revealed at the appropriate time, we now discover that the Greek gospels are full of Hebrew idioms, Hebrew thought patterns, Hebrew literary devices and Hebrew syntactical structures. Indeed, sections contain such slavishly transparent transliterations that they can only be based on Hebrew originals. These sections are mainly those which record the words of Jesus and those of his opponents. Luke's gospel is the most remarkable in this regard. The evidence is now overwhelming that the sayings of Jesus and those of his opponents were taken down at the time of their utterance, in the language in which they were uttered, in the place in which they were uttered.

Accordingly, the bad news for most theologians and biblical scholars is that we can no longer have confidence in their views. By continuing to assert that the gospels were only committed to writing after a period of long, oral transmission in a language and culture far removed from their original Jewish context, they stand opposed to the rising tide of knowledge and understanding.

However, no personal and philosophical preference will alter the inescapable fact that the New Testament is not based on Greek thought but on Jewish thought.

At a very early stage, Christianity cut itself off from the tree onto which it was grafted, and it remains cut off to this day. However, because knowledge is no longer the exclusive preserve of ecclesiastics and academics, and because of the rapid pace of its dissemination, we now see all too clearly that the Christian age, characterised more by war, hatred and division than by love, peace and unity, is soon to die.

The Spirit of Truth, which I repeat is a thoroughly Jewish concept, is abroad and cannot be stopped. Unless Christianity returns to its Jewish roots, re-grafts itself onto the tree from which it sprang, it's sickness is terminal.

When the major doctrines of orthodox Christianity centred upon Jesus are examined, and we compare them with the meaning of the texts on which they are supposedly based, we will find that these doctrines have absolutely nothing to do with Jesus the Jew or with original Christianity. Worse than that, we will find that they distort and misrepresent the central redemptive theme of the Bible from start to finish.