Home Archives
The Empress of the Americas : Part IX
A Simply Great Choice!

The Empress of the Americas : Part X

...continued from The Empress of the Americas : Part IX

The Catholic hierarchy of today is well aware that the story of the Miraculous Tilma is fraudulent. Two of their own drew attention to that fact as far back as 1556.

In 1556, Francisco de Bustamante, head of the Colony's Franciscans, delivered a sermon in which he ridiculed the supposed "holy" origin of the tilma image. He stated in part:

"The devotion that has been growing in a chapel dedicated to Our Lady, called of Guadalupe, in this city is greatly harmful for the natives, because it makes them believe that the image painted by Marcos the Indian is in any way miraculous."*

“In this place called Tepeyac they had a temple dedicated to the mother of the gods, that they called Tonantzin, which means “Our Mother”. There they gave many sacrifices in honor of this goddess. And they came from more than 20 languages and from all parts of Mexico, bringing many offerings... Men and women, as well as young men and young women came to these celebrations. There were great multitudes of people and everyone said, ‘Let’s go to the celebration of Tonantzin’. And now, there is in that same place a church built to Our Lady of Guadalupe, also called Tonantzin.”

Sahagún warned that it was not the Virgin Mary who was venerated on Teyepac Hill but the indians' own mother-goddess. He stated that this identification of Mary with Tonantzin "appears to be a Satanic invention."** 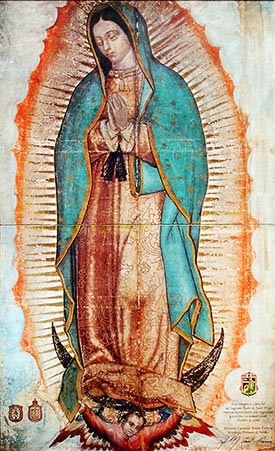 As I said previously, dreams of a wholly Catholic New World were thrown into disarray when groups of non-Catholic Christians began to colonise the eastern seaboard of what is now the continental United States of America.

The "catholicisation" of the USA is now at the door.

Posted at 05:41 AM in Marianology, Virgin Birth and Incarnation | Permalink | Comments (0)