...continued from "The Black Microbes"

Another star appeared in the firmament in the crucial year of 1922. The Archbishop of Milan, Cardinal Ambrogio Damiano Achille Ratti, a man whose career seemed to run in tandem with that of Mussolini, was elevated to the Papacy as Pope Pius XI on February 6.

Even though Mussolini had been able to form a coalition Government on 30 October 1922 and by November had obtained from King Victor Emmanuel III a right to rule by decree for a period of twelve months, his political fortunes remained tenuous. His position in his own party was strengthened by the December establishment of the Grand Council of Fascism, all appointments to which were kept in his own hands, but his Government relied on a weak coalition which could rapidly break down and force the King to dismiss him. 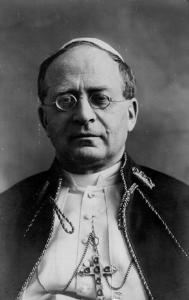 If Mussolini were ever to achieve his goal of supreme leader of a totalitarian state, then now was the time to introduce into play his two most valuable cards: the 'black shirt' terrorists and those 'black microbes' of whom he had once so jeeringly spoken.

The focus of the Italian people at that time would have no doubt centred on matters domestic which affected their daily lives, such as those reported by the Fascist newspaper Il Popolo edited by Mussolini's brother, Arnaldo.

But other significant happenings, such as the January 1923 integration of the 'black shirts' [Fasci di Combattimento] into the Italian armed forces [Milizia Volontaria per la Sicurezza Nazionale], and an unheralded meeting also that January between Mussolini and Vatican Cardinal-Secretary of State Gasparri, held far more grave ramifications for the Italian people, and for the world at large, than they would have ever imagined.

The Vatican had been ready to open negotiations with the Italian state over the Roman Question as early as the immediate post-war years but had been waiting, as Cardinal Gasparri* said in an interview of 29 September 1921: "for a statesman with whom there could be discussion in the matter."

The first meeting** between Mussolini and Gasparri took place at the home of a Catholic Senator, Carlo Santucci:

"It would seem that the only firm commitment that Mussolini entered into was a promise that his Government would save the tottering Banco di Roma [in which the Vatican had a large stake] from collapse in return for the replacement [as President of the Bank] of Santucci with the philo-Fascist Catholic M.P. Prince Francesco Boncompagni-Ludovise. Thus Mussolini secured his first foothold in the Catholic world..."