The Sisters of Mary

I said in More Marian Madness that:

"by redirecting thought towards Mary as the proposed 'Spiritual Mother' of all humanity, Rome is attempting to draw Islam within her skirts."

Then, in a following post, The Hindu Mary, I drew attention to the fact that because of the prevailing "mother goddess" worship in India, the Hindu communities there were also being targeted as likely candidates to be drawn into Roman Marian worship. As I reported in The Hindu Mary, Cardinal Vithayathil, President of the Catholic Bishops' Conference in India said:

"Almighty God is the Lord of history and he can always overcome the effects of disunity caused by human weakness. The Hindu communities in India are extremely open to the concept of 'Mother...'

Cardinal Vithayathil went on to say that a solemn definition of Mary's spiritual motherhood in her roles as co-redemptrix, mediatrix of all graces and advocate [the proposed fifth Marian dogma] would:

"bring more peace built on justice in the world. It will give a new spurt to evangelization. It will bring about greater devotion to Mary and confidence in her intercessory power."

Now, in the latest report from the Union of Catholic Asia News we discover that the Roman campaign to have Mary worshipped as the "spiritual mother of all humanity" is bearing rich spiritual and temporal fruit.

Increasing numbers of Hindus are visiting Marian shrines, worshipping her as "Our Lady of Miracles," pouring oil over her image, and purchasing replica body parts corresponding to their particular ailments which they offer up to her in intercessory hope. Increasing numbers of Catholics are visiting Hindu shrines where are performed such sacrificial practices walking barefoot on hot coals. 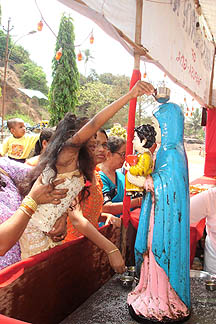 It concerns Rome not one iota that  goddess-worshipping HIndus supposedly believe that the "Blessed Mother is a sister of a Hindu goddess..." But why would it? Both sets of devotees perform equally pagan rituals.

According to the report:

"Chandrakant Chodenkar, a Hindu, said his people hold the Blessed Mother "in deep reverence" as they believe she is "one of the seven sisters of our goddess." After the ritual of oil pouring, Hindus also enter the church to kiss the feet of a larger Marian statue kept inside, and pray for favors.

"Hindus believe Our Lady of Miracles to be Mirabai, a sister of the Hindu goddess Lahirai, the presiding deity at a temple in Shirgao-Bicholim, about 15 kilometers north of Mapusa. The temple celebrates its feast on April 29." 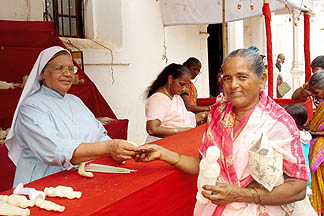 As I said in The Hindu Mary:

"...the end-game for the Roman Catholic Church is to lift up their Queen of Heaven to such heights that she will seamlessly merge with all the other "mother goddess" incarnations of paganism so that all the world will come to rest in her shade - and by extension to trust in her most devoted worshipper: Rome.

Photos:
Top: Oil for pouring over Our Lady of Miracles is sold, collected under the grid, then resold.
Bottom: A Hindu woman seeking a grandchild purchasing a wax replica of a baby.

Posted at 07:50 AM in Marianology, Virgin Birth and Incarnation | Permalink | Comments (0)