Home Archives
The "Cup of Trembling"
Black on Black

" there is only one possible revision of the Law of Guarantees and that is its abolition, followed by a firm invitation to his Holiness to quit Rome." *

According to D'Agostino,** a youthful Mussolini had further described the clergy as:

"black microbes as fatal to mankind as tuberculosis germs"

and... "the first fascist program in 1919 had called for "the seizure of all goods belonging to religious congregations and the abolition of episcopal revenues." **

But less than a year later, Mussolini had said...

"I believe that Catholicism can be used as one of the greatest forces for the expansion of Italy in the World."

Mussolini abandoned his anti-ecclesiastical rhetoric and began to embrace the papacy even before he was able to form his first coalition Government on 30 October 1922 because the closer he came to attaining real power, the more he realised that without the positive support of the Church, his dream of Empire would remain just that - a dream.

With both Mussolini and the Church pursuing overlapping foreign policies, sharing a hatred of  Marxism, Communism, Socialism, Liberalism, Democracy, and Secular Humanism - precisely those things that the Lady of Fatima in 1917 confirmed that she also hated - any compact he could forge between them promised to be a marriage born in Heaven.

And what manner of creature would this proposed marriage give birth to?

What could Mussolini offer the Church? He could protect them from their worst enemy, Communism; he could make them an offer they couldn't refuse regarding financial reparations for the loss of papal state revenues; he could enshrine into law the Church's teachings on population control and divorce; and, most importantly, he could confirm Catholicism as the official religion of the Italian State.

And what could the Catholic Church offer him? He, Mussolini, would gain respectability both at home and internationally because his would be the first government approved by the Vatican since the establishment of the Italian State fifty years before. He could pursue his expansionist dreams and introduce his economic programs knowing that at his back, immuring him from criticism, stood the enormous moral and spiritual forces of the Roman Catholic Church. 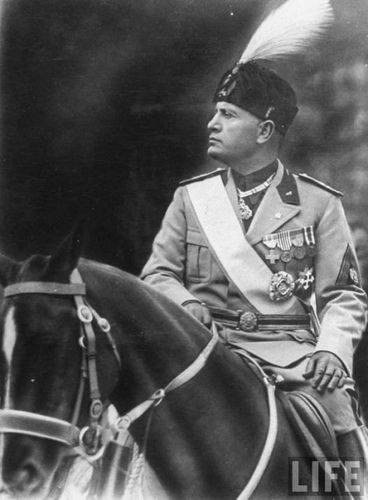 Crucial issues would have to be ironed out, education especially, and the Catholic Church was a hard bargainer. But, then again, so was he...and first, he would have to consolidate his power.