Home Archives
No Mercy Sunday
The Sisters of Mary

...continued from A Brief 'Il Duce'

"at least Mussolini made the trains run on time."

And what gave rise to Mussolini's obsession with trains and their timetables? Well...

The unsettled conditions of Post World War I Italy had facilitated the rise of paramilitary squads of mainly disgruntled former soldiers, anti-clericalists, nationalists, and conservatives who occupied themselves by attacking trade unionists, socialists, leftists, and others of that ilk. These ready-made agitators known as "Blackshirts" had been co-opted by the former Socialist Mussolini and eventually became the military wing of his Fascist political party.

As Mussolini's power had grown, so too had the power of his "Blackshirts" to threaten, intimidate, and do violence to all his would-be opponents. Mussolini's rhetoric identified the wearing of the "black shirt" with his proclaimed Fascist values of spiritual superiority, struggle and courage.

As we saw in the previous post, Mussolini demanded the formation of a fascist government to restore order [the classic technique of one whose every utterance inspires disorder]. On 29 October 1922, King Victor Emmanuel III bowed to his demands and invited Mussolini to come to Rome to take over the reins of government.

Mussolini then responded to the invitation but he did not arrive at the head of any heroic "March on Rome," as the propaganda myth was later to assert. In reality, this would-be Caesar and his baggaged vainglorious dream of a restoration of the ancient Roman Empire travelled overnight by train from Milan, but legends are not made of such humdrum stuff.

Mussolini formed his Fascist Government on 30 October and "amidst praises for Mussolini from newspapers, politicians, cultural personalities and industrial elites, fascism's reign in Italy began." * 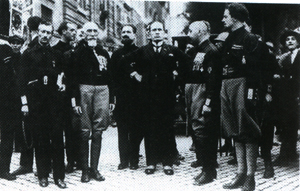 Some 25,000 fascist Blackshirts had been prepared to attempt a violent takeover of Rome but their militaristic dreams of conquest fizzled into a less than glorious finale when they also, in large part, ended up being transported by train to the city where they paraded before the King and Mussolini on 31 October.

As Falasca-Zamponi so pertinently observes:

"The violent take-over of Rome thus never took place, and the Black Shirts' march-parade ended up being the choreographed appendix to Mussolini's legal appointment as prime minister." [page 1]