Home Archives
The Curious Case of Wixted & Kennedy
The Roman Question : The "Prisoner of the Vatican"

The Roman Question : The Papal States

...continued from Rome and Fascism : Introduction

On 11 February 1929, Pietro Gasparri, Cardinal Secretary of State to Pope Pius XI, and Benito Mussolini, Duce of Fascism and Head of the Italian Government, signed the Treaties of the Lateran, bringing to and end the 'Roman Question,' the sixty-year-old dispute between the Papacy and the Kingdom of Italy.

So...what was the 'Roman Question?'  This fascinating subject will be divided into two parts - The Papal States and The Prisoner of the Vatican.

Since the days of the Roman Empire, the Popes had been temporal as well as spiritual sovereigns.Throughout the long centuries, the papacy had gradually acquired territories within Italy known as the Papal States. From about 1859, however, the Papal States had been whittled away by forces working towards the Risorgimento, the unification of Italy. 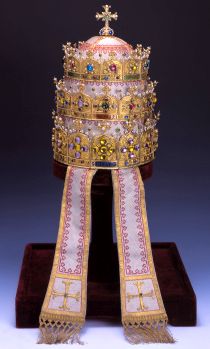 By the eve of unification, all that was left to the Papacy was a narrow strip of land across the peninsula and the City of Rome. In September 1870, Italian troops occupied the City of Rome and made it the capital of the new unified Italy. All that was then left to the Papacy under Pope Pius IX was the Vatican Palace, the Lateran Palace, and the country residence of Castel Gandolfo.

"The Roman Question had its origins in an ideological conflict, a conflict between the secularising and modernising tendencies of Liberalism and the resistance to this development on the part of the Catholic Church.

"Like other European Liberals, the Italian Moderate Liberals le by D'Azeglio and Cavour enacted a series of laws, first in Piedmont and then in the rest of Italy which wrested control of such matters as education, marriage and censorship from the Church, established freedom of religion for Protestants and Jews...and confiscated a substantial portion of the property of the Church."

"But the Church and State dispute in Italy had a dimension that sharply differentiated it from similar disputes elsewhere, for the process of Italian unification [ the 'Risorgimento'] necessarily involved the destruction of the Pope's temporal power, that is his sovereignty of the Papal States of central Italy. In September 1870, the last remnant of that sovereignty was extinguished when Italian troops occupied the City of Rome and and made it the capital of Italy." 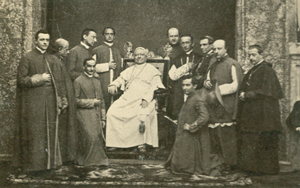 Note particularly that depriving the Pope of his temporal power "...established freedom of religion for Protestants and Jews."

coming up...Part 2 of The Roman Question : The Prisoner of the Vatican

It was interesting to read the Churches attitude to non-catholic forms of worship as a result of the treaty and concordat - "tolerated and admitted". The Church chaffed at having to co-exist with these organisations and "it reaffirmed the full and absolute sovereignty of the Church in the Government of Souls". It referred to its "divine right" in this regard.
See The Treaty of the Lateran, by Benedict Williamson.
The invocation of the Trinity at the start of the Treaty and Concordat is strange for a secular document.