Home Archives
The Roman Question : The "Prisoner of the Vatican"
Papal Bull

The Roman Question : Of Errors and Anathemas

...continued from The Roman Question : The Prisoner of the Vatican

Of course, it cannot be said that this "Prisoner" had been just idly praying up and down and twiddling his thumbs while political and military turmoil raged outside his walls. We may even surmise that, as the inevitable liberalist movement drew the net ever tighter around the Vatican, Giovanni Maria Mastai-Ferretti began to dwell upon his prerogatives, his authority and his inalienable rights.

Ferretti attempted to unman his opponents by first offering them a new and more wondrous contemplation of Mary. So, on the 8 December 1854, he proclaimed the Dogma of the Immaculate Conception. Predictably, a little more mediaeval superstition had exactly nil effect on men whose minds were fixed on the expanding horizons of the Enlightenment.

Undaunted, however, the Pope followed up this opening salvo with an 1858 declaration by Mary herself that the Pope was correct about her Immaculate Conception!* Who could possibly argue with that?  If the Pope had a direct line to Heaven, then he also had Heaven's approval, the obvious corollary being that his enemies did not. It was one thing to challenge the Pope, but quite another to challenge Heaven itself, and so on, and so on...

Unfortunately for the Pope, his enemies probably had neither the time nor the will to dwell upon these theological particularities and neither did contemplating heavenly Marian compassion and tender maternity soothe the savage breast of modernism and liberalism so those wondrous events at Lourdes, which should have shaken men to their core, were met with nothing but yawns, and possibly sniggers.

Pius eventually realised that his best chance lay in appealing to man's earthier instincts so he devised an attack he thought so terrifying that the enemy would be rendered helpless with dread, something akin to that of the Israelites when confronted with the thundering voice of YHWH at Sinai. Well, that was the reaction he sought to provoke anyway.

Accordingly, on 8 December 1864, Pope Pius IX issued the Encyclical "Quanta Cura" [Condemning Current Errors] in which he "reprobated," "proscribed" and "condemned" sixteen evils touching on errors of the age such as modernism, liberalism and freedom of religion. The Catholic Church, he said, has a divine right to exercise her influence "not only over private individuals but over nations, peoples, and their sovereign princes," even to the end of the world! So who, he asked, could be so impudent as to dare assert the heresy that the Pope's absolute authority - an authority given by Christ himself - could be subject to any civil power? Just for good measure, "Quanta Cura" was accompanied by the "Syllabus of Errors," naming eighty anathematised errors.

Instead of the enemy falling back in dread, Ferretti's voice uttering its damnations, its anathemas, and its hells of boiling oil raised only a few twitters. 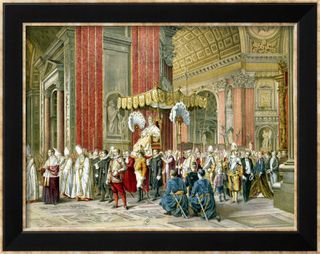 By the following July, as the sound of marching feet appeared to grow ever louder, the Council had devised a dogma whereby the Pope's judgement on matters of "faith" and the limitless horizon of "morals" would be declared "infallible."

All to no avail, however, for within a few weeks of the declaration of the binding dogma of Papal Infallibility, Italian troops siezed Rome on 2 September 1870.

As we saw in the previous post, the Bishop of Rome, the Successor of the Prince of the Apostles, the Vicar of Christ, and the self-proclaimed "prisoner" then dropped his mask of sanctimonious piety and began hurling personal abuse at all and sundry, bestowing such epithets as "wolves," "liars," "satellites of Satan," and "monsters of hell" before assuming the martyr's cloak and nursing his wounded dignity in his self-proclaimed "prison," a practice continued by his successors until the "Roman Question" was finally settled in 1929.

Millions of Catholic faithful believe in the dogmas of Papal Infallibility and the Immaculate Conception without realising that, rather than being the products of sober reflection and sound biblical exegesis, they were devised as tactics within the battle strategy of a Church desperately seeking to assert religious and political authority over the forces of Italian Unification.

* The Marian Apparitions at Lourdes in southern France reported by Bernadette Soubirous. February-July, 1858.

See also The Patter of Little Feet and Adam's Rib

PHOTO:
Arrival of Pope Pius IX on the Sedia Gestatoria [mobile throne] at the Opening of the First Vatican Council Artist: French School

Posted at 04:02 AM in Marianology, Papal Primacy, Virgin Birth and Incarnation | Permalink | Comments (2)

I think the doctrine of the Infallibility of the Pope is a con perpetrated on gullible Catholics. It is just the old doctrine of the Divine Right of Kings dressed up to suit the particular circumstances that the Pope found himself in.
This extract from Wikipedia puts it in context.
"The Divine Right of Kings is a political and religious doctrine of royal absolutism. It asserts that a monarch is subject to no earthly authority, deriving his right to rule directly from the will of God. The king is thus not subject to the will of his people, the aristocracy, or any other estate of the realm, including the church. The doctrine implies that any attempt to depose the king or to restrict his powers runs contrary to the will of God and may constitute heresy."
Most of the civilised world woke up to the self-serving nature of this doctrine when used by the Kings of Europe. That the Pope should have resurrected it for his own aggrandizement is a scandal.

As I was looking at Wikipedia, I noticed that the 23rd March was the anniversary of the signing of the Enabling Act in 1933 allowing Hitler to rule by decree without the Reichtag ie Dictator.
This wonderfull piece of legislation was bought to the German people courtesy of the Vatican thru the future Pius XII.
As a quid pro quo for the signing of a Concordat with Nazi Germany, the German Centre (Catholic) Party, headed by a priest, was ordered to support the legislation. The rest is history!