The Vatican's Warrior for Peace

On 5 February 2009, the Israeli Ministry of Foreign Affairs issued the following statement:

"This morning, Thursday, February 5, 2009, an Israel Navy force intercepted, boarded, and took control of the cargo boat named Tali which was bearing the flag of Togo and was illegally attempting to enter the Gaza Strip." [Full story here.]

Now we all know that Pope Benedict XVI has been in a little hot water over his decision to rescind the excommunication of Holocaust-denying Bishop Richard Williamson of the Society of Saint Pius X but now the temperature may rise a few degrees with the revelation that when the Israeli Navy boarded the Tali, whom should they discover on board but His Excellency, Hilarion Capucci, the exiled former Greek-Catholic [Melkite] Archbishop of Jerusalem.

The Arab Press described the persons on board the Tali as 'peace-activists.' Now seeing that Syrian-born Hilarion Capucci has a very mysterious and decidedly warrior-like history it is worthwhile recounting some of his exploits.

In 1974, while holding the office of Greek-Catholic Archbishop of Jerusalem, Capucci was caught smuggling into Israel dynamite, machine pistols, grenades and ammunition in his "official" Mercedes. At his trial he upbraided:

"The vile conquerors who came from the darkness to desecrate the holy city of Jerusalem, cradle of two religions, Christianity and Islam. Only Jesus Christ, who weeps in Heaven over the fate of Jerusalem has the right to judge me." [Islam and Dhimmitude: Where civilisations collide, Bat Ye'or, Fairleigh Dickinson University Press, 2001, p. 269]

Capucci apparently travelled on a Vatican passport because he was convicted of using his diplomatic status to smuggle arms to Palestinian militants. He spent two years in an Israeli prison and was finally released due to the Vatican's intervention and then deported on the condition that he not return to the Middle East.

Even John L Allen of the National Catholic Reporter wrote this of the Archbishop in February 2002:

"To call Capucci’s past “checkered” would be an under-statement. He first came to public attention when he was arrested on August 18, 1974, by Israeli security forces in after returning to Jerusalem from a trip to Lebanon. His offical church car was found stuffed with TNT and guns headed for the Palestinian Liberation Organization to be used in terrorist attacks of Jewish civilians.

"Capucci, now 81, has lived in a private apartment in Rome since his release, and according to sources, has maintained a low profile within Melkite circles in town. Yet he is quite visible on the political scene, often taking part in demonstrations or appearing on TV.

"Italian author Oriana Fallaci, whose recent anti-Islamic polemic La Rabbia e L’Orgoglio was a publishing sensation in Italy, has called Capucci “that saintly man with a Mercedes full of bombs who lives in the Vatican.” [Allen's article here ]

The Oriana Fallaci article to which John Allen refers was published in Corriere Della Sera in April 2002.[An English translation can be found here] Oriana Fallaci's excellent article went on to say:

"I find it shameful that in Italy there should be a procession of individuals dressed as suicide bombers who spew vile abuse at Israel, hold up photographs of Israeli leaders on whose foreheads they have drawn the swasitka, incite people to hate the Jews. And who, in order to see Jews once again in the extermination camps, in the gas chambers, in the ovens of Dachau and Mauthausen and Buchenwald and Bergen-Belsen et cetera, would sell their own mother to a harem.

"I find it shameful that the Catholic Church should permit a bishop, one with lodgings in the Vatican no less, a saintly man who was found in Jerusalem with an arsenal of arms and explosives hidden in the secret compartments of his sacred Mercedes, to participate in that procession and plant himself in front of a microphone to thank in the name of God the suicide bombers who massacre the Jews in pizzerias and supermarkets. To call them “martyrs who go to their deaths as to a party.”

In addition to the above, Capucci has many more strings to his bow. There are allegations, rumours and innuendo floating around the blogosphere, especially in Italy, but the following at least can be more or less verified because they were either reported in various media at the time of their occurrence or referred to in later reputable works - 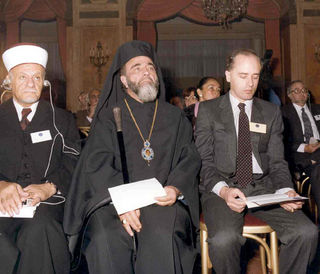 Capucci was a participant at Vatican II in 1964. [See here]

In 1968, "the particularly mysterious figure of the Greek Catholic Bishop Hilarion Capucci" approached Moshe Sasson, the Israeli Prime Minister's representative for political contacts with Arab leaders in Jerusalem, the West Bank, and Gaza. Capucci claimed to be putting forward proposals on behalf of the Vatican and King Hussein of Jordan [Israel, the War, and the Year that transformed the Middle East, Tom Segev, Macmillan, 2007, p. 517]

On 13 May 1981 in St. Peter's Square, an attempt was made to take the life of Pope John Paul II. After the would-be assassin Mehmet Ali Agca was apprehended, he made a statement alleging he had Palestinian connections.

Curiouser and curiouser, our rapidly becoming familiar friend Hilarion actually turned up at Rome's Gemelli Hospital where the Pope was in intensive care to deny that Agca had been sponsored by a Palestinian organisation. He later called a press conference on 15 May to tell reporters that Agca was lying when he claimed sponsorship by a Palestinian organisation. [The Plot to Kill the Pope, Paul B Henze, Charles Scribner's Sons, 1982, page 7]

Just four months later, in September 1981, the New York Times reported that he was denied permission to enter the United States, presumably because he was a convicted arms smuggler.

"Archbishop Hilarion Capucci of the Melkite Church of the Eastern Rite said today that he would lead a peace mission to Baghdad on Sunday to try to secure the release of hostages.

"The Syrian-born Archbishop said he hoped to speak with President Saddam Hussein about the plight of all foreign nationals detained in Iraq and Kuwait.

The report went on to say that the Archbishop:

"has extensive contacts with Arabs and Muslims. A few months after Iranian students seized diplomats and staff at the American Embassy in Teheran in 1979, Archbishop Capucci was one of the few allowed to visit the hostages."

In a 1996 CIA Publication entitled A First Tour Like No Other, one of the Americans held hostage in Iran, CIA operative William J Daugherty, spoke of his captivity in the American Embassy:

"Easter Sunday [1980] passed quietly, but long after midnight that night I was awakened and taken upstairs to meet Archbishop Hilarion Capucci, the former Archbishop of Jerusalem, who had once been imprisoned by the Israelis for gunrunning. This occurred in the ambassadorial office, which was crammed full with our captors, some of whom I had not seen in months. It was a non-event for me, however, and to this day I do not understand the purpose. My picture was not taken, and I was not given anything. The Archbishop, the first non-Iranian I had seen in months, said nothing memorable. After a few minutes, I was taken back to my room, befuddled as to why my sleep had been interrupted for something that was apparently meaningless."

We next hear of Capucci in 1997 when it was reported by Teheran IRIB Television that he had been holding talks with the Iranian foreign minister Ali Akbar Velayati on the question of Jerusalem and "Palestine." Capucci reportedly told the Iranian that "the Muslim people of Iran are revolutionary standard-bearers of humanitarian and moral values."

In 1998, according to Ha'aretz, the Israeli Government considered barring the entry into Israel of Archbishop Butrus Moua'lem because of his links to Capucci. Moua'lem had recently been appointed by the Vatican as Greek-Catholic bishop to the Galilee. The Vatican protested and the Israeli's backed down. [Story here] 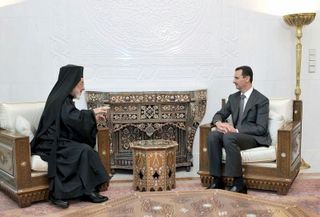 A little over a month ago, on 21 December 2008, a website calling itself the Sword of Jihad reported that Capucci turned up in Syria to have talks with President Bashar al-Assad and produced a photo to prove it. The talks apparently centred on "the situation in the occupied Palestinian territories and the tragic state of the Palestinian people caused by the Israeli occupation's practices, particularly in Gaza Strip." [Story here ]

In the wake of his latest exploit on board the "Tali," the Catholic Asia News Service is reporting that Capucci is the "current bishop of Cesarea." [Story here]

And just to top it all off, Capucci has appeared on stamps issued by Iraq, Libya, Syria and Egypt.

Aside from some deliberate obfuscation, I think we have discovered more than enough of substance about this seasoned warrior for peace to urge the Israeli's to ask Pope Benedict the following questions:

The Israeli people should demand to know the answer to these questions...weren't some of the persons responsible for the Holocaust issued with Vatican passports to escape justice via the Vatican 'Ratlines?

Top: Inaugural session of the International Symposion on "The Concept of Monotheism in Islam and Christianity" (Rome, 17 November 1981). From left: Sheikh Ibrahim Al-Qattan (Jordan), Hilarion Capucci, Archbishop of Jerusalem, and Dr. Hans Koechler, President of the I.P.O.

he was interviewed one of the baots heading to gaza this mornign and presumably has been held by Israeli forces. Like all the other civilians still no news on his fate.