For quite some time I've been intending to write a series about the the Roman Catholic Church's relationship to 20th Century European Fascism. Not knowing quite where to begin such a massive undertaking, I've been dragging my heels.

But now, 'providence' has provided the spur and an indication of the way forward. Begin at the beginning, it seems because it just so happens that the first European experiment in Fascism arose in Italy and today, 11 February 2009, marks the 80th Anniversary of the Lateran Treaties between Italian Fascism and the Vatican!

A very good place to begin...

The Vatican is planning some celebrations to mark the occasion. They will take the form of an exposition titled "1929-2009: Eighty Years of Vatican City State" and will be held from February 11 to May 10 in the Charlemagne Wing, located at the end of the left colonnade of St. Peter's Square 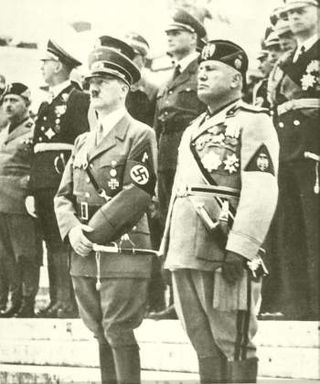 Interestingly, the Vatican states that "the accords were signed after negotiations with the Italian King Victor Manuel III."

This is a demonstrable lie! The King was no more than a figurehead.

"The secret negotiations on the Lateran Treaties lasted two and one-half years, from 5 August 1926 to 10 February 1929, even though not continuously. Discretion was facilitated by the hardly exalted rank of the negotiators. On the Vatican side, this was Franceso Pacelli, a layman, jurist in Vatican service, and brother of Eugenio Pacelli. For the discussion of the material of the Concordat, Prelate Borgongini Duca of the Secretariat of State was also involved.

"The Italian negotiator was, until his death on 4 January 1929, the state councilor Domenico Barone. Thereafter, Mussolini himself, supported at the conclusion by high government officials, conducted the negotiations."*

In the next post, I'll attempt to lay the foundation vital to an understanding of the circumstances leading up to the signing of the Lateran Treaties.