...continued from "Honest Abe" and the Vatican

I said in my last post that there was a point at which two parallel lines of research met - between the assassination of President Lincoln and 19th century Italian religious and political history.

Italian Line
Since the days of the Roman Empire, the Popes had been temporal as well as spiritual sovereigns.Throughout the long centuries, the papacy had gradually acquired territories within Italy known as the Papal States. From about 1859, however, the Papal States had been gradually whittled away by forces working towards the 'Risorgimento,' the unification of Italy.

Lincoln Line
On Good Friday, 14 April 1865, Abraham Lincoln was assassinated at Ford's Theatre, Washington, by John Wilkes Booth. The fatal shot was fired by Wilkes, who was killed several days later, but others were involved in the assassination conspiracy and four of these conspirators were subsequently hanged.

One of the condemned conspirators was Mary Surratt, born in Waterloo, Maryland, and schooled in a Catholic female seminary in Alexandria, Virginia. She married John Surratt Snr. at age seventeen and gave birth to John Harrison Surratt Jnr. in 1844. In 1861, John H. Surratt enrolled in St. Charles College, Catonsville, Maryland, and began studying for the priesthood. He returned home after the sudden death of his father in 1862 and later served as a Confederate Secret Service courier and spy.

Mary Surratt, owner of the “safe house” used by the conspirators, protested her innocence throughout the trial in the face of overwhelming evidence and, despite appeals from the Bishop of Baltimore, she was hanged. She proclaimed before her death:

I think J. Wilkes Booth was only an instrument in the hands of the Almighty to punish this proud and licentious people." (Weichmann Affidavit - see Sources below)

Her son, John H. Surratt, also a major conspirator, had fled to Canada before he could be captured and was hidden by Father Charles Boucher in the St. Liboire Catholic rectory a few miles from Montreal. Surratt remained there throughout the trial and the hanging of his mother on 7 July 1865. He was then forced to move on to Montreal where he was hidden by another Catholic Priest, Father LaPierre, until he could be moved to Quebec and then onto a steamer, the 𝘗𝘦𝘳𝘶𝘷𝘪𝘢𝘯, bound for Liverpool.

In Liverpool he was once again handled by a Catholic Priest, Father Jolivet, to whom he wrote a letter years later (see Sources).

Where two lines meet
A group of military men known as the Papal Zouaves was formed in 1860 to defend the Papal States mentioned above. The Zuavi Pontifici were mainly young men, unmarried and Roman Catholic, who volunteered to assist Pope Pius IX in his struggles against the forces of Italian unification.

A group of military men known as the 𝘡𝘶𝘢𝘷𝘪 𝘗𝘰𝘯𝘵𝘪𝘧𝘪𝘤𝘪 (Papal Zouaves) had been formed in 1860 to defend the Papal States. They were mainly young unmarried men who had volunteered to assist Pope Pius IX in his struggles against the forces of Italian unification.

So, who was a notorious member of the Papal Zouaves? None other than John H. Surratt who had made his way from Liverpool all the way to the Vatican where he enlisted in the  in 1866 under the alias of Giovanni Watson. Unfortunately for him, he was recognised by an old acquaintance who tipped off the United States Consul in Rome in the hope of receiving the reward money promised for his apprehension by the US Congress (see Sources).

Before the Vatican could hand him over to the US authorities, Surratt mysteriously "escaped." After a series of misadventures, he was eventually captured and returned to the US in February 1867 to face trial as an accomplice to Lincoln's assassination. Because the jury could not reach a unanimous decision on a "murder" verdict, the government decided to retry Surratt on "treason" charges but the indictment fell outside the two-year Statute of Limitations. Because Surratt had been hidden so effectively for so long by the Catholic Church, the government and the people of the United States failed in attempts to bring Surratt to justice.

Something to ponder perhaps... 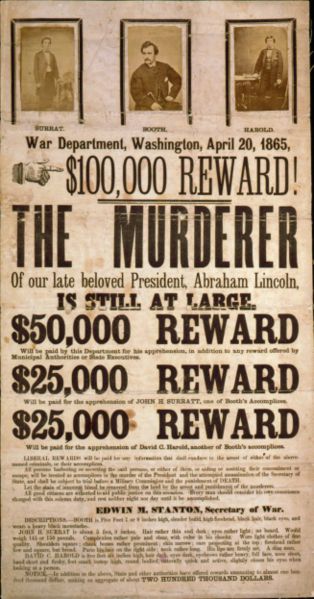 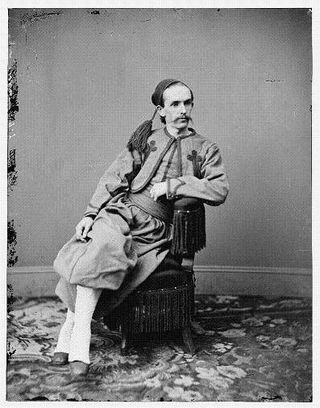 may you rest
in peace