Home Archives
Songs of Gaza
The Cry of Peace...Peace...

The King of Jerusalem : Part IV 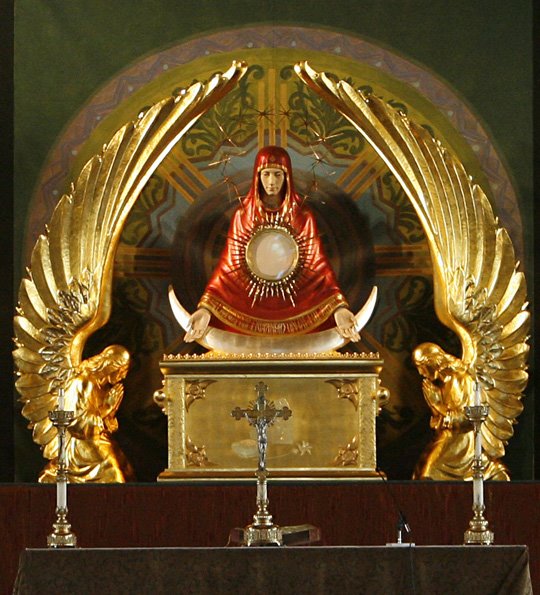 I had thought that by now I was fairly immune to the excesses of the Roman Catholic Church's Mariolatry but I have to confess that the image above actually shocked me!

The image is called "The Monstrance of Our Lady of the Sign, Ark of Mercy" which will eventually be housed in the Sanctuary of Divine Mercy to be built in Chicago. Mary hovers over the Ark of the Covenant, a container that the Bible claims held the stone tablets inscribed with the Ten Commandments.

According to Joyce Duriga of the Catholic News Service:

"It's just the beginning, however, of what will be the Sanctuary of Divine Mercy, the official shrine to the Divine Mercy devotion in Chicago.

"Cardinal Francis E. George of Chicago was on hand to celebrate Mass and bless the new 9-foot, hand-carved and painted monstrance featuring Mary atop a gold-leaf decorated ark flanked by two kneeling angels, also in gold leaf, whose wings extend to shelter her. The 12-inch host, which had to be specially made for the monstrance, is encased in Mary's center.

"Mercy Festival, a week of daily 24-hour eucharistic adoration, began after the Mass. Approximately 1,500 people packed the church and its balconies to see the monstrance.

"This intricately detailed and symbol-laden monstrance is believed to be the world's largest and was created by Polish sculptor Stefan Niedorezo. It was paid for by anonymous donations and royalties from the sale of "A Mother's Plea," the memoirs of Resurrectionist Father Anthony Bus, St. Stanislaus Kostka's pastor.

"...References to Mary in Scripture are inscribed upon her clothes, and other symbolism is worked into the design.

"The Divine Mercy devotion was begun in the late 1930s by St. Faustina Kowalska, a Polish nun who said she had a vision of Jesus in which he asked for devotions to divine mercy on the Sunday after Easter."

The image is supposed to remind Catholics that Mary is the Ark of the New Covenant and that, because of their ludicrous assertion that she "contained the uncontainable God," she was thus the first monstrance. It is rather a monstrosity, encouraging as it does the veneration of images, the worship of pagan virgin mothers, the adoration of the Catholic wafer god, and the idea that the doctrines of Rome were derived from the Hebrew scriptures. But more disturbingly, and why I have included this post in our King of Jerusalem series, is that the image depicts Rome's lordly and supersessionist claim to Israelite sacred symbols, to Israelite's sacred city of Jerusalem, and to Israel's God.

Let us attempt to unscramble this wooden jumble of symbols.

THE WOMAN ARRAYED WITH THE SUN

The woman "arrayed with the sun" in Revelation is the twelve-tribed nation of Israel. In Genesis 37:9-10, the twelve tribes of Israel are described with exactly the same symbols. (Jews represent only 2 of these 12 tribes - the other 10 were not in Judea, Samaria or Galilee when Revelation was written.)

Also known as the "Virgin of the Sign," in reference to Isaiah 7:14 - "Therefore the Lord himself shall give you a sign; Behold, a "virgin" shall conceive, and bear a son, and shall call his name Immanuel." [Our readers will of course know that this verse does not mention a "virgin" at all. See Virgin Birth category.]

From this webpage entitled "Wonder-working Icons of the Most Holy Theotokos," a very... er...colourful description:

"Icons of Mary holding her Son Jesus have been popular since the Council of Ephesus which in 431 solemnly declared Mary to be the Theotokos or Mother of God.

"St. Luke was the first one who painted the "Theotokos", "Mother of God", while she was still alive. He is credited with three icons of the "Panagia", in one case using the wooden table where Mary and St. John ate their meals.

"Throughout history, many Icons of the Most Holy Mother of God have had miracles attributed to them.

"In addition, there are those Icons which may not have been miracle working, but still been venerated with the hope of intercession from the Mother of God.

"...Icons of this type are also called Oranta (Latin for praying) and Panagia (Greek for All-holy). In the Russian land, this image acquired the name Our Lady of the Sign. Here is how that happened. On November 27, 1165 in the midst of the assault on the city of Novgorod by the forces of Prince Andrew of Bogolubovo, the citizens of the besieged town brought the Icon to the city wall. One of the arrows pierced the icon and the Most Holy Mother of God turned her face to the city and shed tears. The tears dropped on the phelonion of Bishop John of Novgorod, who exclaimed: O wonder of wonders! How can tears be streaming from dry wood! O Queen! You are giving us a sign that you are entreating your Son that the city be spared. Inspired by the wonderful sign, the people of Novgorod repelled the attacks of the Suzdal forces..."

Even though it may be difficult to digest such utter rubbish at one sitting, we will nevertheless press on...

THE FEAST OF DIVINE MERCY 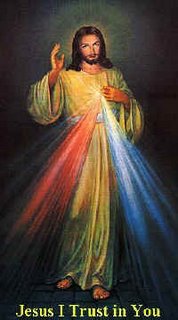 According to Catholic Fire, on a webpage entitled "The Feast of Divine Mercy and its Extraordinary Graces,"  the Feast was:

"...On February 22, 1931, Jesus first appeared to St. Faustina at the Congregation of Our Lady of Mercy convent in Plock, Poland..."

So saccharine is the account of St. Faustina's vision of Jesus that I'd advise against visiting Catholic Fire if you don't have a very strong stomach. In brief, Jesus told St.Faustina to paint an image according to what she saw and that he desired the image [pictured here] to be venerated throughout the world. Apparently, Jesus promised eternal salvation to those who venerated the image and then told the nun to tell the world about the greatness of his "inconceivable mercy."

Jesus' "inconceivable mercy" is then conveniently associated with the 'Mercy Seat' of the Ark of the Covenant.

THE ARK OF THE COVENANT

From the Jewish Encyclopaedia

"The first mention of the Ark in the Bible is in Ex. xxv. 10 et seq., where Moses on Mount Sinai is told to have an Ark of shittim-wood made for the Commandments which are about to be delivered. Minute directions are given for the plan of the Ark. It is to be 2½ cubits in length, 1½ in breadth, and 1½ in height. It is to be overlaid within and without with gold, and a crown or molding of gold is to be put around it. Four rings of gold are to be put into its corners—two on each side—and through these rings staves of shittim-wood overlaid with gold for carrying the Ark are to be inserted; and these are not to be removed. A golden cover (Hebr. ; A. V., "mercy-seat"), adorned with golden cherubim, is to be placed above the Ark; and from here the Lord says He will speak to Moses (Ex. xxv. 10-22). The Ark is to be placed behind a veil, a full description of which is given (ib. xxvi. 31-33)."

By whose name is the Ark called? Who "dwells" between the Cherubim? Who speaks to Moses from the mercy seat? The Bible tells us that it is YHWH.

"And there I will meet with thee, and I will commune with thee from above the mercy seat, from between the two cherubim which are upon the ark of the testimony, of all things which I will give thee in commandment unto the children of Israel." [Exodus 25:22. KJV]

"And David arose, and went with all the people that were with him from Baale of Judah, to bring up from thence the ark of God, whose name is called by the name of the YHWH of hosts that dwelleth between the cherubim." [2 Sam. 6:2. KJV]

"Give ear, O Shepherd of Israel, thou that leadest Joseph like a flock; thou that dwellest between the cherubims, shine forth." [Psalm 80:1. KJV]

1. The Monstrance of Our Lady of the Sign, Ark of Mercy

2. Deacon Michael McCloskey of Holy Name Cathedral, placing the 12-inch host in the monstrance for adoration following the liturgy. Because of it's unique size, the host had to be specially made for the icon. [Catholic New World : Karen Callaway]