Home Archives
The King of Jerusalem : Part I
The Kingdom of Jesus

The Rose of Pompeii

Recently, Pope Benedict XVI visited the Shrine of our Lady of the Rosary at Pompeii and, "in a gesture of filial love," offered a golden rose to the image of Mary. He also "placed the world" into her hands.

The Roman Catholic faithful tend to swoon with emotion at these romantic gestures, but what's it really all about? What's the significance of Pompeii and golden roses?

Let's see if we can work it out.

By the first century BC, the mystery cult of the Egyptian virgin mother-goddess Isis had spread throughout the Roman Empire. Shrines of former Greek and Roman goddesses such as those at Delos, Delphi and Athens were taken over by the very popular Isis.

So popular was the worship of Isis that when Christianity began to spread throughout the Empire, it was only natural on the part of the Hellenist-Latin "fathers" of the Christian Church that they should be a little concerned about depriving the Isis followers of all those little rituals which made life so pleasant...even bearable. So what were they to do? Well, the answer to their predicament was staring them right in the face. Just ascribe to Mary the mother of Jesus the virginity, the shrines, the crowns, the rituals, and the titles of Isis so that, eventually, they two would become one. 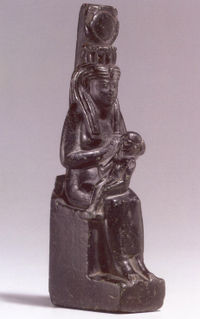 Some titles shared by Isis and Mary:

...and only God knows how many more seeing Isis was referred to as the Goddess of Ten Thousand Names and, at last count, Mary has still some way to go because hers only number in the hundreds. Of course that disparity may just represent a lack of true devotion on the part of Marian worshippers. 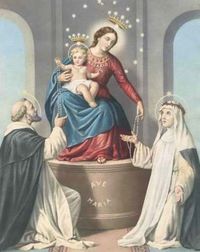 According to Margaret Murray:

"Isis was essentially a goddess of magic and miracles performed by her are recorded in many places. These are usually miracles of healing."*

And wouldn't you just know it:

"Hundred of miracles and healings" are attributed to the image of Mary at Pompeii.

The ancient worshippers of Isis would be touched if they could have known how their ranks were destined to number into the hundreds of millions.

Now, about the golden roses.

We learn from the Catholic Encyclopaedia that:

"A precious and sacred ornament made of pure gold by skilled artificers, which the popes have been accustomed for centuries to bless each year, and occasionally confer upon illustrious churches and sanctuaries as a token of special reverence and devotion, upon Catholic kings or queens, princes or princesses, renowned generals or other distinguished personages, upon governments or cities conspicuous for their Catholic spirit and loyalty to the Holy See, as a mark of esteem and paternal affection." (Roman Catholic Encyclopaedia: Article Golden Rose)

For a partial list of interesting personages who have received these small tokens of papal gratitude and esteem see here. 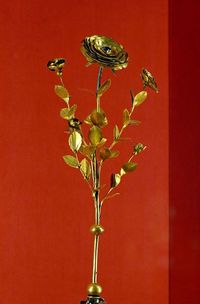 We discover from Charles L. Stinger, however, that there is a far more interesting personage excluded from this list:

"Another annual rite, prompted often by political motivations, was the papal bestowal on a chosen secular ruler of the Golden Rose. The Rose - actually a spray of roses made of gold and embellished with diamonds and sapphires - was ceremonially presented each year on the Fourth Sunday in Lent. In 1500 (Pope) Alexander VI accorded the Golden Rose to his son, Cesare Borgia, in recognition of his recent conquest of Imola and Forli..."**

Well, to continue on, archaeological evidence has revealed that Isis played a dominant role in the cultic worship of ancient Pompeii, and her symbol there was the rose.

Now we know that as regards the origin of the name Rosary, the word rosarius means a garland or bouquet of roses so there is a sort of delicious super-symbolism in the Roman Pope offering to the image of Our Lady of the Rosary at Pompeii...a rose. But in a classic gesture of one-upmanship on the ancient Pompeiians, it's now a GOLDEN Rose. So there!

The Golden Rose pictured above was commissioned by Pope John XXII (1316–1334) and given to Rudolph III of Nidau.