The King of Jerusalem : Part II

...continued from The King of Jerusalem : Part I

Couched in pious language though it may be, the Christmas message of Archbishop Fouad Twal, the Latin patriarch of Jerusalem, once again makes plain the Holy See's 'Grand Plan' for Israel. This 'Grand Plan' consists of two-prongs: a religious campaign to establish ownership of Jerusalem; and a political campaign to destablise the State of Israel.

In The Holy See and the Holy Places, I stated that: "The first crusade to capture the sacred city of Jerusalem and the Holy Land from the Muslims, launched in 1095 by Pope Urban II, may seem like ancient history to most, but to the Vatican, with it relentless purpose and millennial views, the ownership of Jerusalem has never been off the agenda."

In The Jewel in the Tiara, I stated that the religious plan is for the introduction of a:

"...legally enforceable, internationally mandated, religious status for the city of Jerusalem, which will of course require the oversight of a religious institution, which will of course be none other than the Holy Roman Catholic and Apostolic Church - the realisation of the dream of centuries and the crowning jewel in the tiara."

"On this occasion, we shall not forget Jerusalem, this inestimably great treasure entrusted to our keeping. We are deeply concerned about the Holy City! We bear the responsibility of defending its holiness and preserving its unique characteristics."

Who entrusted "this inestimably great treasure" of Jerusalem to the Holy See? Who conferred upon them the "responsibility of defending its holiness and preserving its unique characteristics?"

In The Holy See and the Holy Places, I stated that:

"The Vatican’s calculated violations of the 1993 Fundamental Agreement between Israel and the Holy See, that paved the way for the subsequent establishment of full diplomatic relations, provide an excellent illustration of these time-honoured tactics. Article 11, section 2, reads:

In previous posts we have seen that the Holy See continually violates the terms of the 1993 Fundamental Agreement with Israel and this latest statement by the Latin Patriach of Jerusalem is no exception:

"...As Bethlehem waited throughout history, for the One who would "smash the yoke that burdened" the people, "and the pole on their shoulder, and the rod of their taskmaster," (Isaiah 9:3) so are we awaiting a manifestation of the Savior's grace, that will put an end to the occupation and the injustice..."

"..We do not forget what divides us: greed mixed with injustice, violence and man's persecution of his fellow man. All these, beset the Holy City, not mentioning the building of settlements which strangle it..."

"...In this Christmas feast, we pray for the towns, cities and villages of the Holy Land, because they are isolated from each other. With pain and deep sadness, we observe civilians being blockaded by the erection of walls and barriers..."

"...we turn to our faithful and to all the citizens of the Holy Land, living in deteriorating 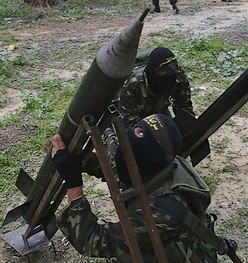 conditions, especially the unjust siege that has struck Gaza, and the hundreds of thousands of innocent residents there. And while we offer our thanks and appreciation, for the efforts invested by all those of good will, to break the siege, we appeal to the local and international authorities, to finally reach a just and final peace in the Holy Land..."

You will notice that Archbishop Twal refers to 'walls,' 'occupation,' 'settlements,' blockades,' and 'siege,' although the Holy See solemnly committed itself to "remaining a stranger to all merely temporal conflicts, which principle applies specifically to disputed territories and unsettled borders.”

You will also notice that he conveniently fails to mention the reason for the "unjust siege that has struck Gaza" - over 6,000 missiles fired into Israel since Israel withdrew from Gaza.

As I said in The Jewel in the Tiara:

"Israel, surrounded by enemies, cannot publicly criticise the Vatican's bullying and manipulative tactics. The enormous influence and power wielded by the Vatican means that the Israeli's are lined up like ducks in a shooting gallery - and both parties know it. The most that can be achieved by Israel is to delay the realisation of the Vatican's 'Grand Plan.'

Top: Jerusalem from the Mount of Olives. (Taken by author)

Middle: Rocket about to be fired into Israel.